At almost six feet tall, twelve-year-old Truly Lovejoy stands out in a crowd whether she likes it or not. (She doesn’t.) So when her family up and moves to teeny-tiny, super boring Pumpkin Falls, New Hampshire, Truly doesn’t stand a chance of blending in. Helping out at the family bookstore one day, she discovers a mysterious letter inside an old copy of Charlotte’s Web and soon finds herself and her new friends swept up in a madcap treasure hunt around town. While chasing clues that could spell danger, Truly discovers there’s more to Pumpkin Falls than meets the eye—and that blending in can be overrated.

Small Town Sleuth Meets Shakespeare
“What happens when a 6-foot-tall 12-year-old named Truly Lovejoy must leave her dream home in Austin, Texas, and settle in the frozen village of ‘population you’ve-got-to-be-kidding-me Pumpkin Falls, New Hampshire’? She finds a mystery to solve, of course. Fans of Heather Vogel Frederick’s Mother-Daughter Book Club series will be pleased to discover that Frederick launched a brand-new series last month. And like the Mother-Daughter Book Club, the first book of the “Pumpkin Falls Mystery” series is charming, slyly humorous, steeped in New England ambiance, and aimed squarely at book lovers. It’s no accident that Frederick, a former Monitor children’s books editor, sets her story’s action in a bookstore. Truly discovers a clue in a first edition of Charlotte’s Web and must brush up on her Shakespeare to stay on the trail. Calling all book lovers–this one looks like a gentle winner.” (The Christian Science Monitor)

“Moving from Texas to New Hampshire, displaced 12-year-old Truly Lovejoy finds herself solving two local mysteries while adjusting to small-town life. Everything changes when Truly’s Army pilot father loses an arm in Afghanistan and returns home depressed, causing her parents to unexpectedly relocate to rural Pumpkin Falls to manage her grandparents’ failing bookshop. Just under 6 feet tall and worried she won’t fit in, Truly’s surprised how quickly she feels part of both school and community as she helps in the bookshop, tries out for the swim team and practices ballroom dancing for Cotillion at the Winter Festival. Convinced a signed, first edition of Charlotte’s Web she’s discovered will alleviate the bookshop’s financial woes, Truly’s determined to catch the thief when the volume vanishes. Meanwhile, a cryptic message she finds inside the book triggers an elaborate treasure hunt as Truly and her new friends decipher clues leading them to hair-raising escapades in the library, church bell tower and covered bridge. Truly tells her story in a relaxed voice, allowing readers to warm to her genuine, self-effacing, humorous, foot-in-her-mouth persona along with her realistically portrayed, fun-loving family and a bevy of eccentric Pumpkin Falls locals. There’s never a dull moment in Pumpkin Falls with Truly Lovejoy on the case in this contemporary, feel-good series opener.” (Kirkus Reviews)

“Fans of the author’s Mother-Daughter Book Club books will rejoice for a new series with a similarly cozy New England setting, great characters, and literary references to beloved classics. Shortly after winter break, Truly Lovejoy finds herself at yet another school, in another state. The middle child of five, things haven’t been the same in her family since ‘Black Monday’ when her usually good-humored father was injured during his last tour in Afghanistan, losing an arm. Having to adjust to what this means for her father’s career, the family finds themselves in his hometown—Pumpkin Falls, New Hampshire—so that he and Truly’s aunt can take over the family bookstore. The mystery begins when Truly finds a note tucked inside a signed, first edition copy of Charlotte’s Web, which sends the protagonist and her new friends on a treasure hunt through town. Though this story really pushes the ‘middle school private eye’ trope, the mystery is not the driving force; other plot lines carry the story. Readers will relish meeting the town’s diverse community of characters, exploring Truly’s now tenuous relationship with her father who is struggling with PTSD, and the plight to save the bookstore from imminent ruin. The book is laden with bookish references, such as Jane Yolen’s Owl Moon, that will delight young bibliophiles as they curl up and enjoy the quaint town of Pumpkin Falls.” (School Library Journal)

“Six months ago, 12-year-old Truly Lovejoy’s life was perfect: her military family had finally settled down in Texas, and she was beginning to make friends. That was before Truly’s army pilot father lost an arm in Afghanistan and decided to move the family to his hometown to take over his parents’ failing bookstore. This first installment of Frederick’s Pumpkin Falls Mystery series, starring an endearing middle schooler who bemoans both her name and her towering height, focuses on themes of adjustment, small-town life, and teamwork. Stuck in a “population you’ve-got-to-be-kidding-me Pumpkin Falls, New Hampshire” during “the coldest winter on record,” Truly is distracted from her disappointment when she discovers a letter tucked inside one of the bookshop’s rarest books. Soon she’s on a treasure hunt, trying to find clues to a 20-year-old puzzle involving two young lovers. There are conflicts with bullies along the way, but Truly also makes an assortment of friends and acquaintances, including some eccentric citizens. Well-developed characters, a cozy community, and an intriguing mystery will warm hearts and pique readers’ curiosity.” (Publishers Weekly) 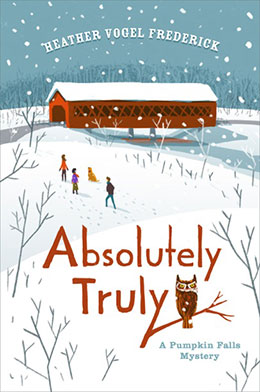