Once Upon a Toad

Once upon a time, Cat Starr lived with her astronaut mom in Houston. But when her mother gets sent on a last-minute space mission, Cat is shipped off to a faraway land—her dad’s house, halfway across the country—to share a room with her real-life evil stepsister, Olivia. Just when Cat can’t take it any more, Great-Aunt Abyssinia comes to the rescue. And things go from bad to worse.

Out of nowhere, toads start appearing whenever she opens her mouth. At the same time, Olivia spouts precious gems and flowers when she speaks. How unfair is that? Before you can say “happily ever after,” the girls are on the run from jewel thieves and a secret government agency. Can Cat save the day—and get rid of all those toads?

Applause for the Book

“After complaining to eccentric Great-Aunt Abyssinia about nasty, name-calling stepsister Olivia, twelve-year-old Cat wakes up one morning and starts spitting out toads. Whether she’s speaking, singing, or playing the bassoon in her school’s talent show, a toad pops out every time she opens her mouth. To make things worse, Olivia is similarly affected, except that instead of toads, she produces flowers and diamonds. Olivia’s status as “the diamond girl” makes her an instant celebrity—and an easy target. So when kidnappers steal their little brother, demanding Olivia in return, it’s up to the jewel– and amphibian–spewing stepsisters to get him back. In this enjoyable twist on a Charles Perrault fairy tale—in the original, it’s the evil stepsister who’s cursed with toads—Frederick keeps readers entertained with an action-packed, zany plot and an even wackier cast: a bald Elvis impersonator, a tough-but-kind diner waitress (whose updo looks like “she’d set her hair dryer control to ‘stun’”), and enormous, colorful, RV–driving, mind-reading Great-Aunt Aby. In the midst of the craziness, Cat is a dryly witty, grounded protagonist; except for a few (toadally) understandable freak-outs, she stays focused and determined. As the fearless “Cat Starr, Toad Huntress,” she creates the requisite happy ending: ingeniously saving her brother; accepting Aby, her newly found fairy godmother; and forging a relationship with her stepsister, warts and all.” (The Horn Book)

“In this re-imagining of ‘Toads and Diamonds,’ Catriona Starr’s astronaut mom gets called up for a space mission with little notice, forcing the 12-year-old to spend three months with her father and stepfamily in Oregon. Not long after her arrival, Cat starts spitting up frogs every time she speaks. To add insult to injury, her stepsister, “Miss Prissy Pants” Olivia, is spitting flowers and diamonds. Within days, they have criminals and government agents after them, and Cat has to find a way out of the mess, toads and all. The girls’ characters are fleshed out well: Cat is a bassoon-playing, outdoors-loving girl, and Olivia, a tap-dancing, aspiring interior designer, is her perfect foil. They are complemented by charming supporting roles, including eccentric great aunt Abyssinia and their younger brother Geoffrey, aka “Barf Bucket,” who might be the only thing Cat and Olivia have in common. When he is kidnapped, the girls embark on a crazy adventure to rescue him. The plot takes many twists, some more predictable than others, and the story is well written and paced. For fans of fantasy and fairy tales, this is a gem.” (School Library Journal)

“In this humorous, quick-moving story, Frederick (the Mother-Daughter Book Club series) delivers a contemporary update of Perrault’s classic fairy tale Toads and Diamonds. In contrast to the original, this version has kind and self-reliant 12-year-old Cat Starr stuck spewing toads from her mouth while her unpleasant stepsister, Olivia, emits showers of flowers and precious gems every time she talks. After Cat’s astronaut mother gets sent to the International Space Station, Cat goes to live with her remarried father and his family, which ignites sisterly rivalry. When the girls start spitting toads and diamonds, Cat discovers that it’s the work of her eccentric Great-Aunt Abyssinia, who is actually an “occupationally challenged fairy godmother” … The slapstick nature of the story translates well to modern-day middle school … Frederick plays up the physical comedy and focuses on the fun, as well as the gradually defrosting relationship between Cat and Olivia.” (Publishers Weekly) 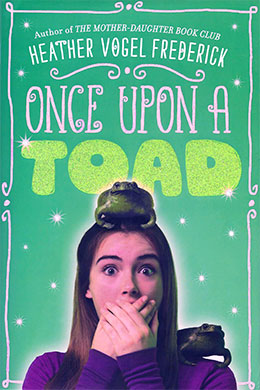