Another wild mystery needs to be solved and it’s up to the Pumpkin Falls Private Eyes to solve it in this hilarious follow up to the heartwarming middle grade mystery, Absolutely Truly.

Even Truly Lovejoy has to admit that teeny-tiny Pumpkin Falls, New Hampshire, has its charms—like the annual Maple Festival, where tourists flock from all over to sample the local maple syrup, maple candy, maple coffee, and even maple soap! But when someone tries to sabotage the maple trees on her friend Franklin’s family farm, Truly has to rally the Pumpkin Falls Private Eyes to investigate.

Meanwhile, she uncovers another, more personal mystery under the floorboards of her very own home—a diary written centuries ago by her namesake, the original Truly Lovejoy … and it might just prove her family’s ties to Pumpkin Falls run deeper than anyone ever could have imagined.

“Following Absolutely Truly (2014), this second Pumpkin Falls Mystery follows middle schooler and gumshoe Truly Lovejoy as she tackle mysteries surrounding a local feud and a family secret. Adjusting to life in Pumpkin Falls, New Hampshire, 6-foot-tall, white Truly’s looking forward to celebrating her 13th birthday with her visiting cousin, Mackenzie, during Maple Madness, a popular tourist event highlighting the local maple sugaring season. When sap lines are sabotaged at two rival maple sugar businesses, locals quickly take sides, prompting Truly to activate the Pumpkin Falls Private Eyes as they surreptitiously set up video surveillance in the sugaring bush. Meanwhile, Truly’s discovery of a hidden diary belonging to her ancestor triggers intriguing historical investigations into whether the Lovejoy house served as an Underground Railroad station during the Civil War. In her down-to-earth, vulnerable, unassuming voice, Truly reveals her love of swimming and bird-watching, her growing crush on a classmate, her unfounded jealousy of Mackenzie, and her irritation with her interfering younger sister. Historical subtext about the Underground Railroad and the New Hampshire setting add special dimensions to this rural mystery. Truly’s fans cheer the return of the likable sleuth in this family-oriented mystery in which past and present collide.” (Kirkus Reviews)

Truly Lovejoy and her pals are back on the case in the second offering in the Pumpkin Falls Mystery series. The 13-year-old Texas transplant is still adjusting to life in picturesque Pumpkin Falls, New Hampshire, when her cousin Mackenzie comes to visit during school vacation and the town’s Maple Madness. As local families begin feuding over a case of broken maple line taps, Truly and her friends are out to find the culprit. Meanwhile, Truly and Mackenzie happen upon an old family diary hidden beneath the floorboards; could the Lovejoys have played a role in the Underground Railroad? Frederick will easily maintain the reader’s interest with the novel’s two main mysteries. Complemented by the congenial setting, the cast of delightful townsfolk, young and old, could almost pass for the denizens of Stars Hollow. Truly’s jealousy over her cousin’s more carefree connections with the boys in town will strike a chord with emerging adolescent readers only now feeling out crushes. Fans of cozy mysteries, get your blankets and hot cocoa ready! (Booklist) 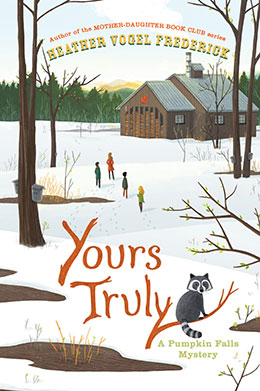